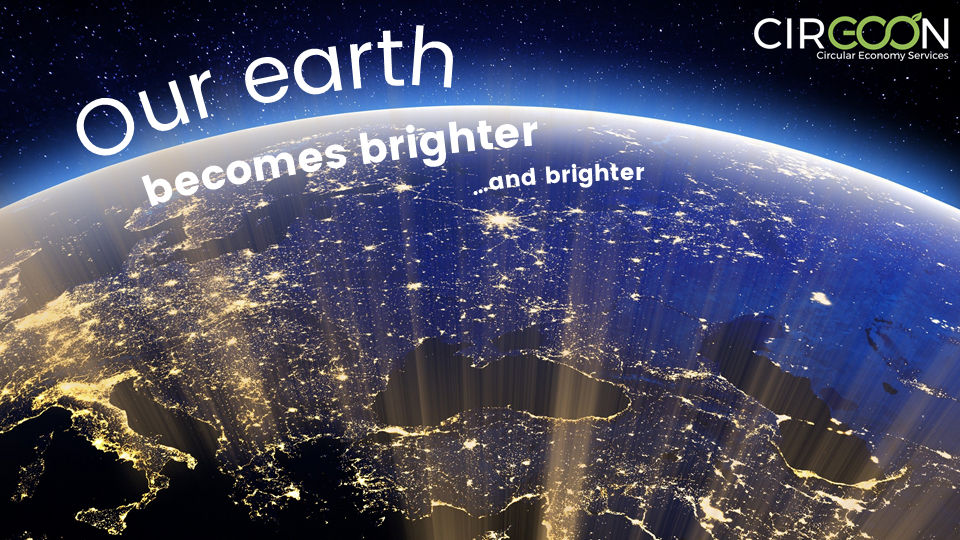 100 years ago, if you stood outside at night, you could enjoy a bright and endless starry sky.  Today, however, even at night the sky never seems completely dark and felt, we see only a fraction of the stars. But what is the reason for this? Why is the sky often simply black, especially in large cities like New York or Tokyo?

The reason is the increasing light pollution of the earth. The inappropriate or excessive use of artificial light – known as light pollution – can have serious environmental consequences for humans, wildlife, and our climate. Light pollution is a side effect of industrial civilization. Its sources include building exterior and interior lighting, advertising, commercial properties, offices, factories, streetlights, and illuminated sporting venues

This also has glorious consequences for humans: Nighttime lighting can upset the hormone balance and throw the internal clock out of kilter.

The fact is that much outdoor lighting used at night is inefficient, overly bright, poorly targeted, improperly shielded, and, in many cases, completely unnecessary. This light, and the electricity used to create it, is being wasted by spilling it into the sky, rather than focusing it on to the actual objects and areas that people want to be illuminated.

This phenomenon has many negative effects on us and our environment. The light pollution has an influence on the nocturnal wildlife, on plant and animal physiology. The rhythm of life is orchestrated by the natural diurnal patterns of light and dark; so disruption to these patterns impacts the ecological dynamics.

With respect to adverse health effects, many species, especially humans, are dependent on the natural body, which is regulated by light and dark (e.g. day and night). The light pollution can lead to sleep disorders and other health problems such as increased headaches, worker fatigue, medically defined stress. And ties are being found to a couple of types of cancer.

A world atlas of light pollution published by an international team of scientists has shown how massively artificial lighting now illuminates the night sky worldwide. In Europe and the USA, 99 percent of the population already suffer from light pollution.

Why not switch off for a moment?

Of course, each of us can change a small part in protecting our world. But even a small action can make a big difference. E-waste includes not only your old smartphone, a television or the broken washing machine but also any kind of illuminants. Don’t forget: Everything that now contributes to light pollution does not only leave its footprint on our earth during use. No, even if the electronics no longer work, we are still faced with a problem that is at least as big: Electrical waste. Digitalisation and progress is one side. The increasing electronic waste and light pollution is the other side of the coin.

We must manage to combine these two things.  A sustainable future held by digitalization. Only a combination of the two components will make it possible to reduce our footprint on the earth. We have developed software that makes it easier for traders, producers and therefore also consumers to ensure a circular economy in the field of electronic waste.

CIRECON has digitalised the waste streams with the help of CIRIS, the reporting and information program.

Why do we always talk about what will be possible in the future? We as CIRECON change things. And we do it now. We are a young tree with strong roots. Let’s grow together.

This website uses cookies to improve your experience while you navigate through the website. Out of these cookies, the cookies that are categorized as necessary are stored on your browser as they are essential for the working of basic functionalities of the website. We also use third-party cookies that help us analyze and understand how you use this website. These cookies will be stored in your browser only with your consent. You also have the option to opt-out of these cookies. But opting out of some of these cookies may have an effect on your browsing experience.
Necessary immer aktiv
Necessary cookies are absolutely essential for the website to function properly. This category only includes cookies that ensures basic functionalities and security features of the website. These cookies do not store any personal information.
Non-necessary
Any cookies that may not be particularly necessary for the website to function and is used specifically to collect user personal data via analytics, ads, other embedded contents are termed as non-necessary cookies. It is mandatory to procure user consent prior to running these cookies on your website.
SPEICHERN & AKZEPTIEREN